Announcing the 60 Days of Blogging 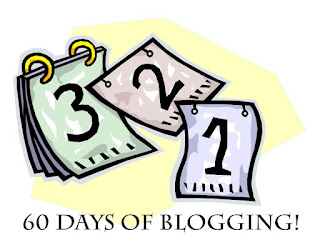 Well lets not ignore the elephant that is in the room.... well on the blog. 2011 came and went and I was just flying away with blogging and crafts. I went an entire year (minus a pair of khaki pants) without conventional shopping. It was hard and I loved it. I got out of some of my debt and found out how much I loved to sew. I was so excited to see what 2012 would bring...

(crickets chirping...) Well 2012 hasn't brought much to the blog! It has been a busy year, I have had bouts of stomach sickness which then I learned if I go gluten free I am fine, but I don't test positive for Celiac Disease. I wrote a grant. Went to 2 scientific conferences. Came back and we have just been working. Time flies! Then I have been sewing but it was more focused on charity sewing- sent my first box out a few months ago which you can read all about it here. And I continued to sew for charity (stay tuned actually!!). And then about over a month ago I severely cut my finger cooking. Grr. This has halted a lot of my crafting and sewing capability. It just seems like it has one thing or another. This is not what I wanted!

Also, on top of everything, the lab is now moving to Washington, DC. I am so excited about doing research in another Institute, but now I have to toss things and pack, plus find a place to live, yada yada yada. The move will happen probably at the end of September/beginning of October! I have time to toss stuff, which I have been lately.

The good news, while I have been able to move slowly with sewing and crafting while the finger healed I have been taking pictures and trying to keep a list of what I need to blog about. I just need to get my self in front of a computer screen at home and type. So after looking at my list and what all I have done I have realized I could do over an entire month of posts! Now I made it my goal to do 60!! And in about 60 days I will be close to moving. So now I am doing a 60 days to DC blogging!!!

So what will be my 60 days to blogging? I will have things from jewelry I've made, clothing, refashioning, gluten free cooking, and general crafts. Each day (and yes to Saturday and Sunday) there will be a blog post! Stay tuned to August 1st for the beginning of 60 days!