Sewing for Charity: Bundles of Love

Now many of you may (or may not know) one of my goals this year was to sew more items for charity. I am trying to get rid of my huge fabric stash (and make my boyfriend happy) and I don't want to sew everything for myself. One of the first projects I decided to tackle first was for Bundles of Love. They are a charity organization that gives needy mothers in Minnesota a diaper bag filled with goodies for each child when they leave the hospital. They started out as a little church group but wow took over Minnesota! They are absolutely inspiring and amazing. Please go and check them out! They do offer some patterns for babies online. 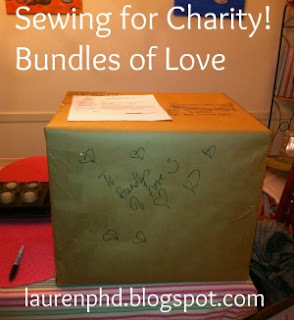 Here is my box of goodies I sent them!!! The box is pretty big and I filled it up to the top! Here is what was included in the box! 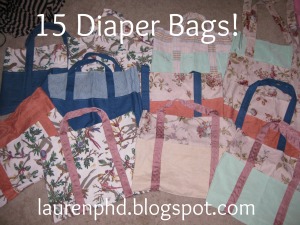 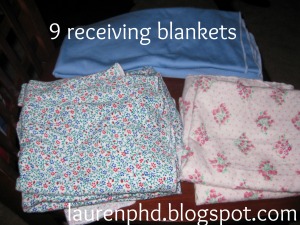 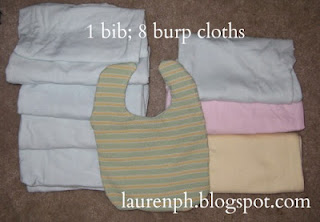 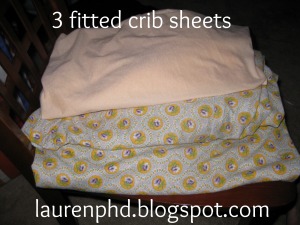 Yes I know! A lot of things I made out of my own stash! I was so excited to send everything out. :)

Now this summer I am going to actually change the organization I am sewing for to.... Dress a Girl around the World!!! I have a lot of fabric that I would probably never use for myself but would make great little girls dresses! Not to mention I just received a donation of bias tape trim and now I can sew until my heart is content! Wahoo!!!

I would love love love to sew about 50 dresses this year. I probably have enough fabric to do so since it doesn't take much. I would be incredibly excited if I could do so! So keep your fingers crossed. And maybe with the scraps I could make more bibs. We will see what happens!

Where have I been on the blog-o-sphere??

I don't know what it is about 2012, but I have been very absent from the blog world. It is not intentional but it just seems like life gets in the way sometimes. So let's address the question as to where have I been??!!

So rewind to March... I decided to apply for an American Cancer Society Post-Doctoral Fellowship Grant and wrote the grant in a week and a half. Wow that was some crazy times! Then I headed to Austin, Texas for the SGO meeting. Austin was lovely! Then I was back for roughly 2 days (but a rough 2 days!) and repacked my belongings and then headed to another meeting in Chicago!!! Actually I was at the American Association for Cancer Research's Annual Meeting! It was a great meeting but I was cold, especially just coming from the warm south!

Luckily through my travels I did not get sick but wow was I tired. Then it was back to the lab to start research back up and regain my thoughts. Being 2 weeks out of the lab sometimes just feels like a lifetime.

I thought I would have more time to craft but I opted to rest and get back into life. I did do some sewing for Charity (which will post soon I promise I just found my camera!) and I sent my first shipment!

Also I had another bad bout of my stomach illness we just can't seem to point out the trigger. I had another friend who also began having stomach issues and she decided to do the primal diet and thought maybe I should try it out. After much reading I decided to just go wheat free and see if that was my trigger. BINGO! Yes we have now identified my trigger wheat and oats. And how do I know? Well I added it back in and felt ill for a while, so yes this is my trigger. Almost 6 years of being tortured and now I finally found my cause. I have given up wheat for 2 months now and I have never felt better! I am not as tired as I used to be, I have a ton of energy and its not from drinking many cups of coffee, its all natural. I don't feel sluggish. The best part is all of my stomach issues are now gone. I mean gone. Gas,bloating, pain, nausea, cramping, and the other issues have all disappeared. I don't spend hours in the bathroom or parts of my weekend clenched in a ball. It probably took me 2 weeks to realize it that they were gone. My boyfriend noticed too! I thought to myself, "wow, this is how normal people feel everyday! This is what I have been missing!". Now I have decided to go completely gluten free. And I will state this I do NOT have Celiac disease. I have been tested many times for Celiac and get nothing. I have a wheat intolerance. I don't think it is a wheat allergy. Whatever it is.. If I give up wheat I feel good. That is all that matters right now!

So eating gluten free what does that mean?
Well no more pizza (unless gluten free-easier said than done), cake, baked goods, bread, beer, granola, and many many other things.

What can I eat?
Fruits, veggies, meat, sushi (yes rice is gluten free), ice cream, dairy items, potatoes, so many of the foods I love I can still eat.

Breads is tough b/c lunch and breakfast are difficult especially if I am traveling. I am having to learn how to cook all over again, without regular flour. I make sure I eat more fruits and veggies daily now. I went to my first farmers market and even bought veggies that I have never ate before and I'm experimenting with food! Stay tuned for recipes now on the blog!

I have begun to refashion and sew and projects will begin to trickle in. I also lost my camera. I found it this weekend. Yay! I probably won't be able to do as many projects like last year bc/ I will be spending my time in the kitchen more! But its a good thing! I do also have a few bellydance projects in the wood works too. And I'm also going through things as I have felt this urge to purge things from my place. Why? I have no idea. Maybe it is because I no longer feel ill and I am level headed and I can focus on tossing things? Or it is just spring/summer cleaning. Either way, I am getting rid of unused items. One of them being recipe books! They are no longer good for me. :( Martha Stewart you need to come out with a gluten free cookbook. Seriously!

So as May is flying past me, I wish everyone a productive and creative summer. And anyone who has GI issues I urge you to consider giving up wheat, it has changed my life! :)

Cheers and here's to my posts becoming more productive. :)

So many of you in the South know, football is a religion down here. One of our traditions is to sit outside our friend Charlie's house on a Saturday and watch football the entire day while eating and cooking some great food!
Charlie has a tv that he has now decided to keep outdoors but wanted something to keep it protected from some of the outside elements. In comes me!

I had this pretty horrible thick dirty rose fabric I acquired in the fabric stash that I never knew what to do with it... until now! Yay for using up my fabric stash! I have no idea what it is... some sort of thick synthetic b/c it felt like it could repel water.

The TV measurements height: 20 inches, length= 31 inches, depth= 5 inches AND it was also on a wall bracket about 2/3 the way up, or at least according to my boyfriend.

Since I did not want the thing to be fun and allow for seam allowance I added 2 inches to each measurement, I sew on a 1/4 seam allowance. New numbers: 22, 33, 7. So now I am ready to cut some things out!

Now to do the sides. This was really challenging for me b/c I have never done anything like this before- creating something more 3D b/c essentially we are making a box and now need to finish it.

I did not take the best pictures of this next part... But I will attempt to explain what I did. I started at sewing the top of the box to the top of the side. Then I sewed the tv front and back to that middle section. Repeat on the next side. Then hem the bottom.

Ta-da!!! We now have a box that is missing the bottom. I was impressed considering I really had no instructions or true plan.

I sealed all the edges of the fabric with seam sealant.

Now it is time to allow for the bracket. My boyfriend said it was about 2/3 the way up. So I literally measured 2/3 of the way up in the middle of the tv back and cut. \

I hemmed the edges so it would not fray. And done!

Here it is on the tv! It was the perfect fit.. not too loose and not too tight and even had room for the wall bracket!

Just in case you were wondering here is what it looked like from the back.

We just had a bad rainstorm this week and this was the test... and I passed. TV completely dry and safe from all the elements. The guys gave me a thumbs up! And I did this in 1 hour and got rid of some fabric! Wahoo!