I don't know why but when I look at this dress, I think it is sad. Like a sad sack. Just a sad dress.

I mean it fits well in the bust. The bottom skirt needs some working. And then I realized another sad spot. There was a hole that someone attempted to close. I did not catch it

I thought about this dress for a while. I did not care for the straps. It gave the black and white striped fabric combined with the cut of the bodice a bit of a overall feel. I decided I was going to remove them. And I didn't care for those buttons.

I realized the straps had been folded under by the person who used to own this dress. Oh easy.

But I still had to open up the back to pull out the strap.

Done. I wound up stitching the back closed.

I found a shirt that I no longer wore anymore and decided to connect the two. I put the dress on with the shirt and pinned it while I had it on. Which was fun....

Ok now the hole(s) I need to seam them out.

Looking at the dress there was pleats in the front. I figured I could take out the pleat and sew out the holes.

I opened up the bottom hem so later I could fold it back up and close it and have a nice finished hem.

I serged the middle part so I could reduce the bulk. Then I reconnected the skirt with bodice.

Not done tho... I needed to cut off the rest of the shirt from the inside. I wanted to use that to make the belt.

I took an old belt and used that as a template for the new belt for the dress.

Now to attach. I attached where I wanted it and sew down.

Fold over making sure the edge of the fabric is underneath. Sew it down.

Make sure the ends by the zipper are clear and finished.

Done! This dress is much more happier now.

I love my new dress. And the holes are gone! 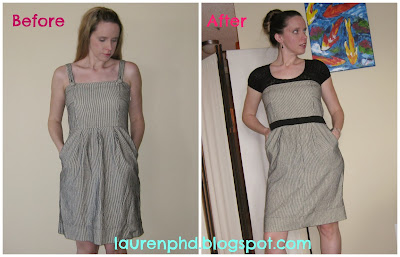 I love it!!!! I am a big fan of refashion. The new dress looks great!

Surprising way to make it work! I thought the holes were gonna do you in, but you showed your true talent!